At the origins of Saint-Cricq High School: a donation

Monsieur Jean, known to his family as Henri Saint-Cricq and his wife Adèle Bonnefoy wanted to donate their propriety, the Saint-Cricq Villa, to the city of Pau.

It was a lovely, three-storey 270 sqm villa with small outbuildings and it was built on a land of 4,900 sqm. It was situated 1 avenue Porte-Neuve which later became rue Henri Faisans, the name of one of Pau’s mayors. Maybe that street got this name because the latter, as a mayor, received the donation or maybe because he lived there at some point.

Henri Faisans explained the reasons for this donation at the city council dated from November 17, 1893

Monsieur and Madame Saint-Cricq, owners in Pau had told me, a few years back, of their intention of giving to the city of Pau their nice building of the rue Porteneuve to set up a vocational school for boys. This generous thought was inspired from the regret they had felt many times when they had seen that brilliant pupils had turned their backs on vocational jobs and had favored jobs in teaching, the Post-Office, Telegraph, Roads and Bridges Authority. To them, a clerk would be less happy than a learned worker; the latter, with more independence, has more opportunities to improve his situation. They also thought that, in our enlightened society, it would be easy to train excellent workers if they could have access to learning about art, science and general knowledge that you can find in other large cities of France.
The previous councilors had thought about taking this path when they reclaimed the upper school of iron and wood. Unfortunately, this organization was very rudimentary, I was therefore sure you would gladly welcome the suggestions made for creating a vocational school.

I think it my duty to point to M. and Mme Saint-Cricq the inconvenient springing from the coexistence of the two schools and their possible rivalry. The idea being that the vocational school could provide the upper schools with students, it would be more sensible to adopt a common syllabus ; the reduced staff could teach in both schools. That is why I have commissioned the architect to visit the school and see that is meets the two schools’ requirements.

The present donation was made under the following conditions :

yes At the end of the period of usufruct, the city of Pau will have to create and set up a boys only, non-religious vocational school in the premises. On the propriety, only buildings destined to teaching will be erected. If that is useful, the city of Pau will be allowed to transfer classrooms currently situated in the old asylum; the donators consider the courses of the upper school as preparatory to the vocational school. 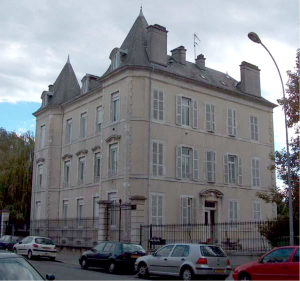 The City of Pau had a boys only upper primary school created in 1836 and its premises (located in the former asylum) were starting to become too small. The idea was to transfer that school in the Saint-Cricq Villa.

The villa was built between 1855 and 1874 by Dominique Saint-Cricq and Anne Anglade ; they had two children : Henri and Laurent. The latter was dead at the time of the donation; therefore Henri Saint-Cricq inherited from the villa.

The works in the building started then. The blueprints were presented in December 1899, the additions made in 1901 for an opening in 1902. Four classrooms were set up on the ground and first floors. In the north eastern part of the land, a workshop with two parts (one for iron, another for wood) was built as well as a sketching room, a hallway and lavatories. Their organization is to be found below.

The original equipment of the workshop comprised :